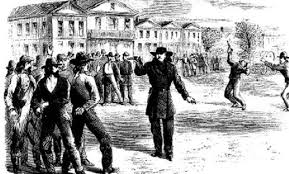 On July 21, 1865, Springfield helped give birth to the Wild West era when the town square was the site of the Wild Bill Hickok-Davis Tutt “quick draw” shootout. Two small brass plaques inlaid into the pavement on Park Central square mark the locations of both Hickok and Tutt during the famous shootout. Our young country was still a little wild around the eyes when this stored watering hole was born.

The building that stands at 318 W. Commercial, on the Southeast corner of Commercial and Campbell, is steeped in legend and has spawned many tales that are woven into the fabric of Springfield’s collective conscious. It has featured some of the best entertainment to pass through town, received special notice from Anheuser-Busch for the sheer volume of beer that was served from behind its legendary bar and has had as much money in its safe as a local bank.

1870- The Atlantic and Pacific Railroad, Springfield’s first railroad, laid its tracks a mile north of “old” Springfield into the “new” town of North Springfield. A commercial district sprang up around the railroad depot and the street was thus named “Commercial. “

1880-The building that is now Lindbergs, according to city records, was listed as a house of Ill repute during this time. Martha Wallace and Belle Wilson were the madams of the brothel.  They had 7 “tenants” that were referred to by in the census at the time as “inmates.”

The place is best known, however, as “Lindberg’s” after one of its previous owners, J.C. “Carl” Lindberg. Lindberg ran the place during prohibition, in the festival atmosphere that was post-prohibition and for several decades thereafter.

Bob McCroskey and Bruce Rader bought the building in 1978 and opened for business as “Lindberg’s” in January of 1979. At that time many of the “old timers” who had frequented the establishment since the 1920s were still around.
McCroskey says some of these folks remember the joyous day when the great prohibition experiment ended. “In 1933, there were seven places that opened when the town went wet,” he says. “These old guys would come in and tell us about that day. They talked about what a great day it was when the town went wet. Everybody was just in all the bars, waiting for the beer to show up.”

Liquor laws were quite different then.
McCroskeyey says, “They used to have beer by the drink and a liquor store. You weren’t supposed to drink liquor in the bar. So, everybody had a half pint in their pocket, drinking that along with the beer in front of them.”

Social mores were different back then, too. “It used to be men only. In the back space was a place for the ladies to go and they had wine or some kind of more refined thing for the lady folk,” says McCroskey.
He laughs and adds, “We didn’t discriminate. We’d serve anybody that…didn’t get caught. We carded everybody, but some people faked us.”

Those who remember hanging out at Lindberg’s will remember the massive safe that sat at the front of the main room. The safe is a throwback to the days when Commercial Street was the hub of the railroad industry in Springfield.
McCroskey explains, “The railroaders would come in on payday. The place would cash $40,000 to $50,000 in railroad checks. They cashed your check for you and you’d stay there and drink beer.”

During the “railroad” years the 22-foot bar employed SIX bartenders at once.
McCroskey points out that, “They got all sorts of awards from Anheuser-Busch because they were selling so much beer. There was a photo or painting of it that Anheuser-Busch gave to the Lindberg family. They loaned it to an attorney for a court case and they never got it back.”

Another fixture of Lindberg’s is a piece that is shrouded in mystery, legend and conjecture. The bar and bar back have been in Lindberg’s as long as anyone still living can remember. How and when it got there, no one is absolutely certain. Stories have been passed down through generation after generation and the truth is probably a combination of the various legends.

Bob McCroskey’s version is: “It went in in 1903. It’s a Brunswick bar back and I don’t know what they made besides bowling lanes and bar backs. It came out of St. Louis on a train. They had to ‘noodle’ it over; a lot of it was in one piece. The top of the bar front is 22 feet long and about 22 inches wide. It’s all one piece, it came from one tree. They don’t harvest trees like that anymore.”

James Radke, a contributor to this publication  worked at Lindberg’s in 1979 and 1980. He offers this version of the bar story: “The back bar- from what I understood- was from the 1904 St. Louis World’s Fair. It was used there first.”

Another account says the bar was built in St. Louis around 1854 and actually made its way to Springfield sometime later via a covered wagon. This seems rather unlikely since, as mentioned above, the top of the bar front is one massive, 22-foot piece of wood. The railroad did not arrive in Springfield until May 3, 1870.

That the bar was made in St. Louis seems to be an undisputed fact, but some people say that when it arrived in Springfield, Lindberg’s wasn’t its first home. These folks claim it was first installed in a tavern close to what is now Park Central Square and moved to Commercial Street around the turn of the 20th century.

The true origin of the bar may never be known but it is a beautiful piece of woodwork. If all goes as planned, you’ll get a chance to see it sometime around August.

Entertainment had long played a role in the Lindberg’s story and in the 1970s, starting when the place was known as “The Joint,” rock ‘n’ roll, bluegrass, blues and R&B bands regularly graced the stage there. When McCroskey and Rader took over, their focus at first was on acoustic music, bluegrass and jazz. Guitarist Ira Edelman played on Tuesday nights while bands such as The Undergrass Boys, The Swingfield Spring Band, The Mid Missouri Hell Band and Homegrown played weekends on a regular basis.

Eventually rock ‘n’ roll began to make headway. Many now legendary local groups -like the all female band The Debs, Fool’s Face, The Dog People, Ozarkestra, It’s Alive and countless others- made frequent stops at Lindberg’s. The bands liked the funky feel and impressive history of the place and everyone enjoyed playing for Bruce. (McCroskey sold his interest in Lindberg’s to Rader in December of 1980.)
The Bel-Airs, out of Columbia, MO, built their considerable following slowly but steadily playing Lindberg’s. The fantastic blues trio is still together and going strong all these years later.

National acts began showing up as well. Cult favorites NRBQ, with a grand piano in tow, crowded onto the relatively small stage, while blues giants Willie Dixon, Koko Taylor, John Hammond -and a number of others- entertained crowds that packed the house. Jazz legend Woody Herman –complete with his Thundering Herd- played the club a few times and Tex-Mex legend Doug Sahm became a regular.
Radke remembers other Lindberg’s trademarks from that era. The place had what he describes as, “probably the best shuffleboard table in town.”

And there was Jenny. Jenny was the daytime bartender and cook. She had worked there when Paul Young ran The Corner Tap Room, just prior to Rader and McCroskey. She stayed on. Radke remembers her well.
“She would bake all weekend long and come in with the best baked goods, just to give to her customers. She’d just hand ‘em out. She also had a lot of (risqué) jokes she would tell. You couldn’t print them in the magazine…but that lady had some stories.”

Rader ran Lindberg’s for a number of years and after some legal hassles with the music publishing organization BMI, shut down. He leased the building for a time but the tenants couldn’t quite make a go of it. Bruce tried to open back up but found out the saying, “You can’t go home again,” sometimes rings true. He closed up for good in the mid 1990s. 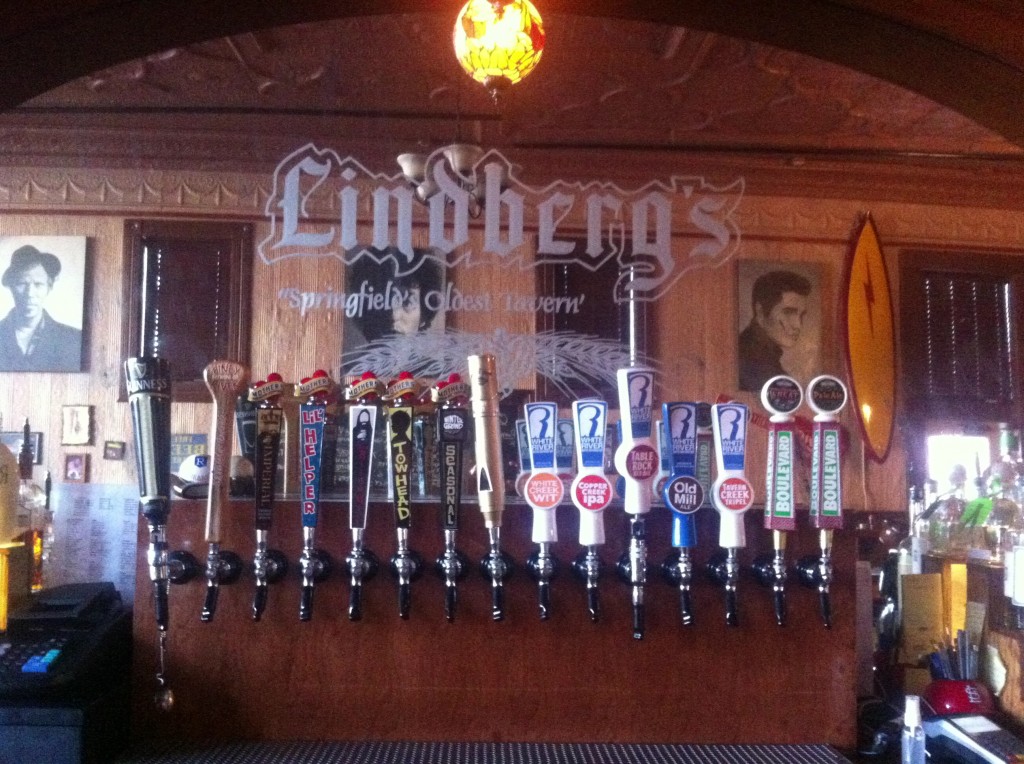 Lindberg’s today embraces the rich history of this building, and carries on the tradition of excellence in food, beverage, and music.   From a wide array of local breweries on tap, to handcrafted cocktails,  we want your next visit to be unforgettable.   We look forward to serving you, and making our own new History.